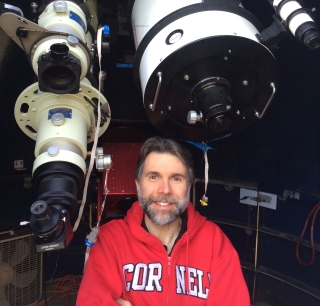 Photoshop for Those in Their "Right" Mind
Image processing can be approached in a highly methodical and technical fashion; hence, the tremendous success of programs like PixInsight. However, for some amateurs a more "right brain” approach could be desirable; this is especially true for beginners who are first climbing the steep learning curves of this hobby. For twenty years, Steve Mazlin has used what he considers fairly basic Photoshop skills to create some amazing images. Only half-jokingly he claims that with the lasso and feather tools he can “rule the world”. Even if you have mastered PixInsight (as Steve hopes to do “after retirement”), a basic mastery of Photoshop is always a useful skill to have in your processing tool box.
A lifelong photography enthusiast and armchair astronomer, Steve dove headfirst into the world of astrophotography in the late 1990's, erecting an observatory dome in his backyard before he had even taken a single image! He has continued to pursue mostly narrowband imaging from his Bortle 5.0-5.5 skies 30 miles outside of Philadelphia, but is perhaps best known in the amateur astronomy community for being a prolific member of Star Shadows Remote Observatory (SSRO) since 2007. SSRO was one of the first remote imaging group ventures, initially stationed at New Mexico Skies, but eventually relocating to CTIO (Chile) in an arrangement with UNC-Chapel Hill -- Steve currently serves as the SSRO team leader. In August 2006, with fellow amateurs Jim Misti and Bob Benamati, Steve organized the "East Coast Conference on Astronomical Imaging". Several of his images were featured in the traveling exhibit known as "Starstruck: The Fine Art of Astrophotography", which toured three art museums between 2012 and 2014. Steve's work has also been published in multiple print and online venues, including APOD. He authored a chapter on imaging workflow/processing in the 2013 edition Lessons From the Masters: Current Concepts in Astronomical Image Processing (edited by Robert Gendler). Just turning 60 a few months ago, Steve still works part time as a clinical neurologist in Bucks County, Pennsylvania. His alter ego, "Mazlinithegreat", can be found on YouTube performing magic, singing "The Elements", or concocting political satire.